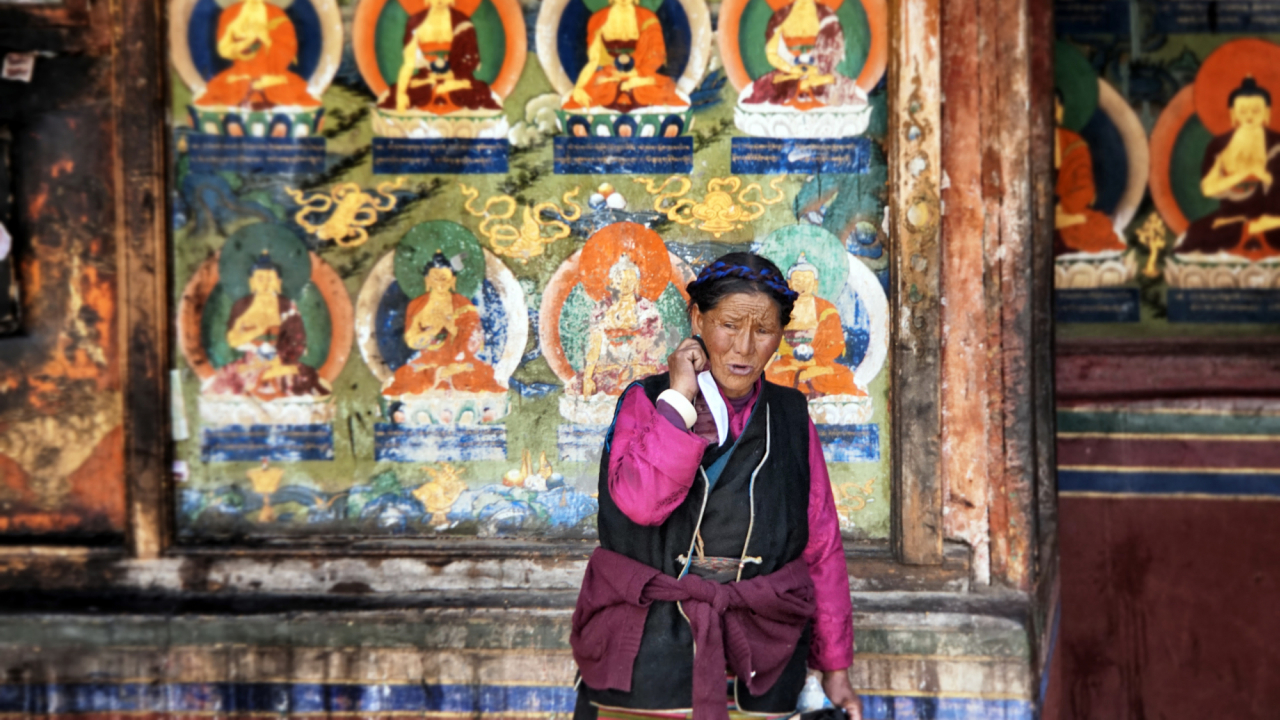 Is Dalai Lama Leader of Tibet?

Is Dalai Lama Leader of Tibet?

On March 17 of 1959, three squads, each consisting of 10 men, slipped through the walls of Norbulingka while everyone slept. Among them was the 14th Dalai Lama, Tenzin Gyatso, disguised as a soldier. He turned around and looked at Norbulingka, his summer palace. Then 23, he probably didn't know he would never see it again.

A week earlier, a Chinese general invited Tenzin Gyatso to a dance performance. He was told to arrive without his security guards, who followed him like a shadow for nine years, wherever he went. At that moment, he realized that he has to run for his life while he can. For two-week, the monks journeyed east, hopping from one temple to the other, hiding in the stables. The Khamba rebels accompanied them to protect the Dalai Lama from the Chinese troops on his trail. The group crossed the Himalayan ridge and reached Dharamsala in India, where they joined other Tibetan refugees who have settled there since the Chinese invasion in 1950.

So, who is Dalai Lama? Why did he have to flee that cold spring night? Why was his life under threat?

After escaping to India, the 14th Dalai Lama became the most famous Buddhist spokesman in the world. Due to his popularity, people often see him as the leader of All Tibetans, but it is a somewhat complicated topic. We must go far back in time to see the whole picture.

Since the beginning of civilization, Tibet has seen constant battles between various feudal lords who fought over pastures and the right to collect taxes. The lords bestowed upon themselves fancy titles such as "king" and "prince" to solidify their power. When Buddhism came to Tibet in the 7th century CE, the nobles started taking religious titles to make themselves both feudal lord and spiritual leaders. But religious affiliation hadn't stopped them from squabbling and exploiting slaves, who made 95% of the Tibetan population.

At the top of the religious hierarchy was the royalty, the descendants of Songtsen Gampo, who united the nation for the first time in the 7th century. However, it didn't take long for the establishment to split. New Buddhist schools arose, offering more effortless ways to enlightenment. Nearly every charismatic monk broke away so that the power and wealth that comes with leading a religious order will flow to him instead of his former teacher. The youngest sect founded in Tibet is Gelugpa, also known as the Yellow Hat school after their distinct yellow hat. Je Tsongkhapa founded it in the 14th century. By subduing the leaders of existing sects without exterminating them, Gelugpa was gradually taking over other schools.

In the 16th century, Sonam Gyatso, a rising Gelugpa monk, further sought ways to establish the order as the most dominant school in Tibet. Thus, he started looking for powerful foreign patrons. It led him to Altan Khan, a chieftain of Mongol tribes in the modern-day Inner Mongolian region of China. Though Altan was a descendant of Genghis Khan, his claim to all of Mongolia was not more convincing than any other royal prince. He recognized that he could strengthen his legitimacy if he declares himself as a reincarnation of Kublai Khan, the greatest successor of Genghis Khan, through Buddhism. So, he invited Sonam Gyatso to come to his domain and teach his people. Upon their meeting, Altan Khan granted the Gelugpa monk the title, Dalai Lama, meaning "Ocean of Wisdom" in Mongolian. His two predecessors were posthumously given the title, making Sonam Gyatso the 3rd Dalai lama. In turn, the monk recognized Altan as a reincarnation of Kublai Khan as he wished. Gelugpa became the official religion under Altan's rule. Within 50 years, most Mongols converted to Buddhism, with tens of thousands of monks loyal to Dalai Lama's sect.

After the meeting, Sonam Gyatso never returned to Tibet and stayed among the Mongols. He fell ill after visiting the Chinese emperor and died at the age of 45. Some 13 years later, a Mongol child, Altan Khan's grandson, was identified as the reincarnation. The Fourth Dalai Lama arrived in Tibet, accompanied by his father and a thousand Mongol cavalry. Most Tibetans were not happy with their new foreign leader. The spiritual leader died mysteriously at the age of 27. Rumors about poisoning circulated in Lhasa, but there is not enough evidence to prove or deny it. However, we have to say that a lowly assistant of the Fourth soon took it upon himself to choose the next reincarnation and became a regent under the new holy man.

The Fifth Dalai Lama was the first in his linage to wield temporal and spiritual power over all Tibet. Thus, he is often referred to as the Great Fifth. He used the Mongol army to restore order and established close ties with the Chinese Qing Dynasty. He also gifted his teacher the title Panchen Lama and sent him to reside over central Tibet while he ruled Lhasa in the east. It tightened Gelug control over the feudal lords and slaves who worked for them. Most notably, the Great Fifth began constructing the 17-store Potala Palace, which became the official winter palace of the future Dalai Lamas. His death was kept a secret for 12 years to carry out construction work without setbacks. During the period, Panchen Lama assumed control of the government. However, he was often challenged by Ganden Tripa, a reincarnation of Je Tsongkhapa, who founded the Gelugpa sect. The two title-holders, alongside Dalai Lama, are considered equal in the Gelug hierarchy. Three holy men hold the power to identify the reincarnation of each other.

In 1697, after the completion of Potala Palace, a 14-year old boy was enthroned as the Sixth Dalai Lama. But the teenager was not ready for a life of celibacy and showed a fondness for alcohol and party. He often sneaked out of Potala Palace and lived in a tent by the gardens, writing poems and love songs. Mongols used his behavior as an excuse to invade Tibet. They arrested the young man and proclaimed another monk as a real incarnation. The Sixth disappeared under custody at the age of 23. Regardless of his disgraceful acts, the public loved him due to his charisma. A few years later, Tibetans appealed to Dzungar, another powerful Mongolian tribe, to depose the Sixth Dalai Lama, who replaced Tsangyang Gyatso.

The Seventh Dalai Lama was discovered while the monk installed by Mongols was still sitting on the throne. Monks secretly brought him to Litang monastery for protection and training. The Seventh was one of the most prominent Dalai Lamas in terms of governance. He made Tibet a protectorate of the Qing Empire. At the time, it prevented the full-on assault, although China is now using this to back its claim over Tibet. The Seventh also abolished the regent's position, banning concentration of power in one man's hands, and instead placed the government in the hands of a four-man council, Kashag. He sat on the throne for 37 years and passed away at the age of 48.

The Eight hadn't left much legacy compared to his predecessor. His only notable achievement was the construction of Norbulingka - the summer palace, from which the current Dalai Lama will escape in fear of the Chinese. The Ninth took the throne at the age of 5 in 1810. He was a prodigy who often challenged his teacher on Buddhist philosophy. A Western traveler described him "The lama's beautiful and interesting face engrossed all my attention. He had the simple, unaffected manners of a well-educated princely child." Sadly, the golden child died only five years after his enthronement.

Six years passed without the Dalai Lama before the Chinese emperor appointed The Tenth through a lottery between six candidates. The lottery was simple: they threw metals bearing each candidate's name and birth chart into a golden bowl and randomly pulled one out. The Chinese emperor claimed that Tibet's selection of senior officials was full of corruption and the lottery would ensure a fair appointment. In reality, it allowed Beijing to rig the election to its interests. The emperor's decision of 1792 continues to allow China to control the Dalai Lama and Panchen Lama's selection. The Tenth planned to launch comprehensive reforms in Tibet. He made a detailed report on agriculture and taxes, but unfortunately, at the age of 19 contracted a mysterious illness. He was on bed rest for three years and died at the age of 22.

The Eleventh ascended in 1842 at the age of 4. He died at the age of 17 before almost becoming the first in 65 years to assume full political power and govern without a regent. The Twelfth was identified when he was an infant and was crowned at the age of 3 in 1860. Qing Dynasty was at its lowest as it had just lost the Opium War. The Twelfth assumed full power of government at the age of 16 but died less than two years later. He became the last of the four successive Dalai Lamas to die under suspicious circumstances at a young age. During this period, from 1805 to 1875, the Seventh and the Eighth Panchen Lamas enjoyed extensive power in the absence of a ruling Dalai Lama. They selected four Dalai Lamas, one after another. All of them died before or just after assuming power, allowing Panchen Lamas to rule unchecked.

In 1879 the Thirteenth Dalai Lama was crowned. He was also only three years old, but he became one of the most influential figures in Tibet's modern history. The British who then ruled India invaded Tibet, forcing the Thirteenth to flee to Ulaanbaatar, Mongolia's capital. For a year, the Tibetan government negotiated with the British right under the nose of Beijing. The Dalai Lama returned to Lhasa in 1909 only to escape again a year later due to the Qing invasion. He returned to Lhasa in early 1913, after the last Chinese emperor relinquished his throne. The Thirteenth declared Tibet's independence. Mongolia, which also had recently broken away from the crumbling Chinese empire, was the only country to recognize it. The Thirteenth died in 1933 at the age of 57.

In 1939, 4-year-old Tenzin Gyatso was proclaimed as the 14th Dalai Lama. He did not know then that one night, in March 1959, he would flee from his own palace and never return.

A unique private tour through the Tibetan Plateau, commonly known as the Roof of the World, during the time the Tibetan people celebrate the Shoton Festival. Indulge through this private Tibet tour in the complex world of Tibetan Buddhism while taking in the mesmerizing views of the Himalayas rising high above this elevated plateau.