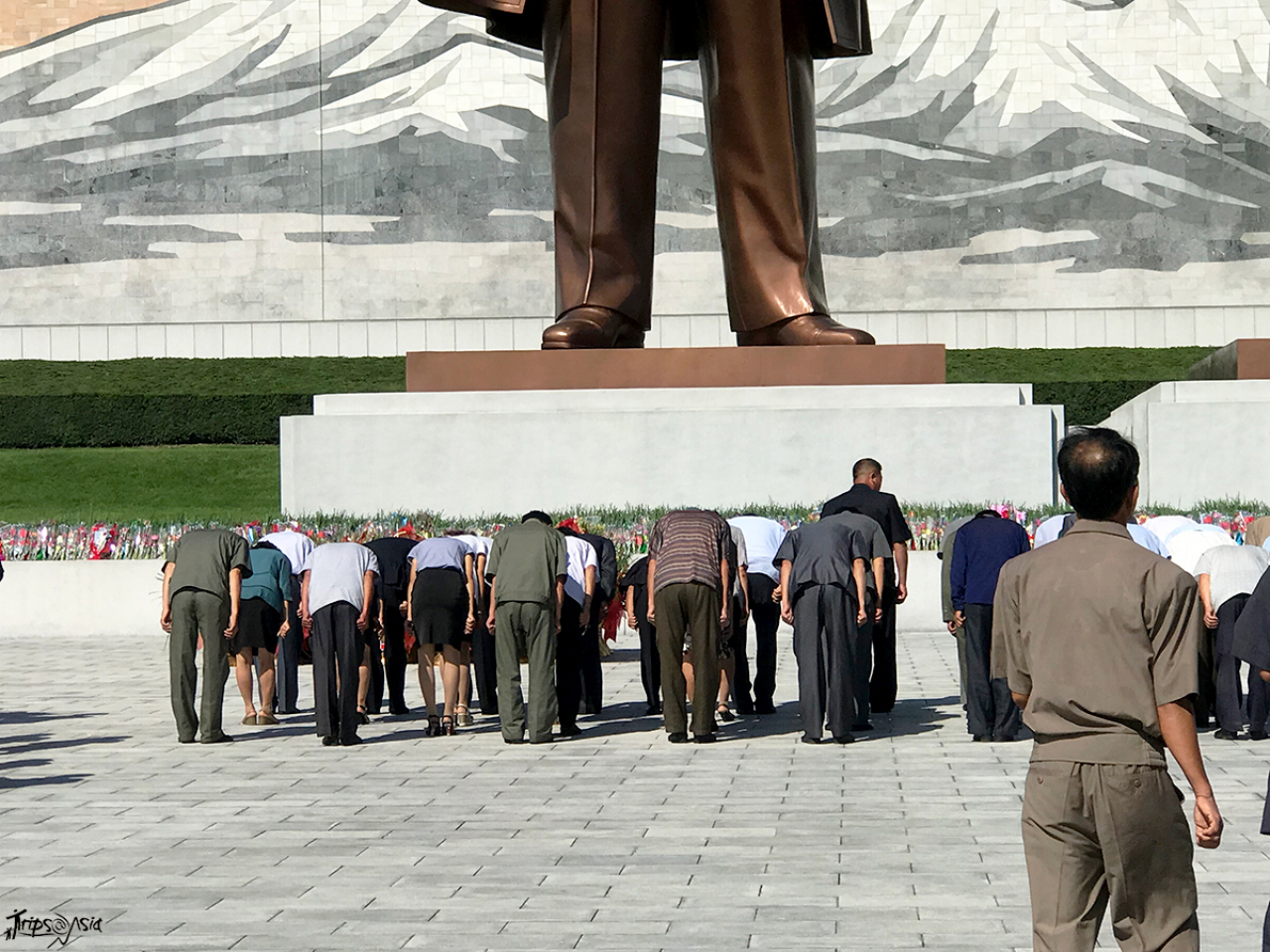 The Korean War began in 1950 with North Korean soldiers pouring across the 38th parallel and ended in 1953 with a stalemate. A new border between North and South Korea was drawn, creating the demilitarized zone (DMZ).

The Empire of Japan ruled Korea for nearly half a century until their surrender in 1945. The Japanese built significant industrial infrastructures in the country's north, mainly in mining, metal, and chemical production. But very little survived the Korean War.

Kim Il Sung, the North Korean ruler, began rebuilding the economy from the ashes after the war. As expected, he introduced a centrally planned economy, where only the government can make critical decisions. The Russians, who have been intervening in Korean politics since the Tsarist regime, provided substantial funding and specialists to help build North Korea's infrastructure. Mao, who came to power just five years ago after a prolonged civil war, was also eager to help. He saw North Korea as a crucial buffer zone to separate China from South Korea and Japan, who were part of the American sphere of influence. More importantly, both Russia and China wanted to contain capitalism from spreading further to the Far East at all costs. Thus, shortly after the war, North Korea saw a speedy recovery under Kil Il Sung. The country re-opened its old mines, established new mines, and built chemical and metal factories.

In 1955, two years after Stalin's death, Kim Il Sung grew bold enough to bring up the concept of Juche or self-reliance. It was a blend of various ideologies, including Marxism, Confucianism, Japanese imperialism, and nationalism. Juche teaches that North Korea is an independent nation, so it must remain isolated from the world, rely solely on itself, and follow its leader's guidance. Kim's ideology has three main principles:

The aspiration for self-reliance is understandable if we look back to the Korean War, where North Korea entirely depended on its allies. Juche was an expression of its desire to break out of the influence of the two communist powers.

During the race for industrialization, financed by Russia and China, North Korea neglected its two key sectors – agriculture and consumer goods. Shortly before starting the first five-year plan, Kim Il-sung introduced the term "Chollima" in 1956, inspired by China's Great Leap Forward movement, which caused the largest famine in human history, claiming the lives of 50 million people. Chollima aimed to motivate workers to achieve the desired outcomes of the plan. The government even started a slogan, "drink no soup," so workers wouldn't use the restrooms as often. The movement's first success was seen the following years when a factory in Kangson, which could only produce 60,000 tons of steel, made 120,000 tons, twice more than its capacity.

In 1957, North Korea completed its collectivization. All private farms became part of government cooperatives to reduce the economic power of the peasants. The socialist competition, this time inspired by the Soviets, started between state enterprises and between workers. To gain an advantage in the race, the factories began to store vast amounts of raw materials in their warehouses, causing nation-wide shortages. The industrial units also reported bogus figures that created startling miscalculations. Facing financial collapse, the government set aside 1959 as a "buffer year" to restore economic balance.

Meanwhile, a political rift was emerging between China and the Soviets after Khrushchev's secret speech condemning Stalin. Mao declared Khrushchev a revisionist and distanced himself from Moscow. The Soviet Union cut its support for Kim after concluding that North Korea may side with China. Khrushchev withdrew Soviet experts, stopped free fuel shipment, and reduced spare parts supply. The Russian sanctions caused severe electricity shortages. The energy crisis halted fertilizer production and terminated the water supply to agricultural lands, leading to food shortages.

However, the Soviet sanctions hadn't stopped North Korea's developments but instead taught them not to depend on their allies entirely. Without much foreign aid, the country got back on its feet. In 1960, Kim Il Sung visited the Chongsan-ri Cooperative Farm, where thousands of families worked together to produce crops on his public relations campaign. He rolled up his sleeves and personally piloted the farmworkers. It was a form of the senior leadership pointing fingers at the low-ranking officials for the agricultural sector's poor performance. After this visit, Kim announced the Ch'ŏngsan-ni Method, in which senior officials would make constant field inspections to supervise the laborers.

In 1961, Kim came up with another awkward idea. This time, he assigned party officials to state-owned companies to tighten control. In every major state enterprise, two management committees have been established. The first one is a group of professionals responsible for running the factory, and the other is a commission of party agents. All crucial decisions would be brought to the council, which would include representatives of both committees. In case of a dispute, the party members would make the ultimate decisions, not the experts.

In the 1960s, North Korea increased its military spending. Nearly 30% of the state budget was directed to the army. Since the 1953 agreement, U.S. military personnel have maintained a continuous presence in South Korea. After the fall with its communist allies, Kim was aware that his regime's defense had significantly diminished. Thus, he turned his attention towards a military nuclear weapons program. At the time, the USSR strongly supported its satellites, including North Korea, for two reasons. First, they wanted the allied nations' vote in the U.N. referendums. The second was to establish a debt trap. Moscow carefully recorded every power station, paved road, and apartment buildings financed by the USSR.

Between 1970 and 1990, North Korea saw significant economic growth with the continuation of Soviet aid. In 1984, the country delivered 7,200 tons of rice, about 500 km of cloth, and 759 boxes of medicine to South Korea as flood aid supply. The South Korean government accepted the donation as a gesture of goodwill. In 1985, North Korea's GDP reached $640 per capita, a decade earlier than China. The average life expectancy increased to 70 while the infant mortality rate decreased to 20 percent. Life in Pyongyang did not look bad. However, beneath the surface, things were a bit different. In 1979, Kim Il Sung managed to settle the country's external debt during the initial talks by deferring payments. However, Japan declared North Korea's bankruptcy a year later. Its national debt was about $ 3 billion in 1986, of which $ 2 billion was to the Soviet Union. The Soviets themselves were in financial trouble. Mikhail Gorbachev, a USSR leader, announced Perestroika and Glasnost reforms and demanded the repayment of the debts in cash.

A year later, U.S. President Reagan called for Gorbachev to tear down the Berlin Wall. Kim Il Sun, who held power since 1947, realized that it was the beginning of an end. Indeed, the Soviet Union collapsed two years later. Baffled by financial issues of their own, the former donors in Russia and Eastern Europe refused to support North Korea's failing economy. The oil imports and energy subsidies from Russia stopped. The North Koreans encountered horrendous electricity shortages. Most of the factories closed their doors while the fields dried up due to a failing irrigation system. To guarantee regime stability, North Korea eventually prioritized nuclear weapons development overall domestic sectors, including electricity. Just five years after the fall of the Soviet Union, North Korea's GNP fell from $ 650 per capita to $ 222 per person. China stepped up to become the country's donor in place of Russians. Since 1993, China has supplied about 70% of the fuel and food imported into North Korea.

As if North Korea didn't have enough to deal with, Kim Il Sung passed away in 1994, and his son, Kim Jong Il, took his place. The same year, a series of floods and droughts struck the country, causing a dreadful famine that had lasted four years. Somewhere between 240,000 and 3 million people died from starvation. North Korea made an official request for humanitarian aid, and the international community responded accordingly. However, the regime failed to distribute food aid without discrimination to all regions of the country. As the government prioritized feeding the military and the elite over civilians, people began eating grass and foraging wild food to survive. In 1997, the regime accused the Minister of Agriculture of spying for the U.S. and sabotaging food production on purpose, thus leading to the famine. A firing squad publicly executed him on government order. Surprisingly, South Korea and the United States were the most significant contributors to food shipments.

During the North Korean famine, ordinary North Koreans abandoned their defunct work units and turned to private entrepreneurship to survive. They became networked both to each other and through the Chinese border. Despite being uneasy with this development, the government was ultimately powerless to stop it. Without a working food distribution system, people relied on black markets to earn money and survive. Families living in cities started engaging in handicrafts, commerce, or transportation services. Private businesses were born in three main sectors:

Officially, private property and private trade are still illegal in North Korea. Yet, private trade accounts for 50 percent of the economy. In 2017, the Korea Institute for National Unification estimated that there were over 440 government-approved markets that employed over 1 million people. The government receives half of its profits for turning a blind eye.

By 2012, North Korea's external debt had grown to $20 billion despite Russia writing off about $8 billion of debt in exchange for mining rights. Although the Kim dynasty demonstrates high survivability, if we look back at what happened in Communist states in the past, an invasion of capitalist culture and a swelling desire for material goods would bring the regime's end one day. While his people are starving, North Korea's leader, Kim Jong-un, lives a lavish lifestyle, from owning a private island to running a personal harem. His extravagant life is enabled by the operations of Room 39, an organization to get foreign currency for the leader by any means necessary. Its agents would manufacture drugs, counterfeit notes, deal arms, and traffick children.

Presumably, despite attempts to isolate itself from the West following the Juche doctrine, Kim Jong Un understands that he must find a way to fill his 25 million people's stomachs to keep his head on his shoulder. Otherwise, hungry people will one day start a bloody revolution.

This Korea private tour celebrates the fusion Korean contemporary culture is all about, from Confucianism to Buddhism through excessive Consumerism and Materialism, and the admiration of the Korean people for the breathtaking natural features surrounding them.